Would you like to switch to the accessible version of this site?

Don't need the accessible version of this site?

Your First Visit is FREE

Video Games and Your Pet 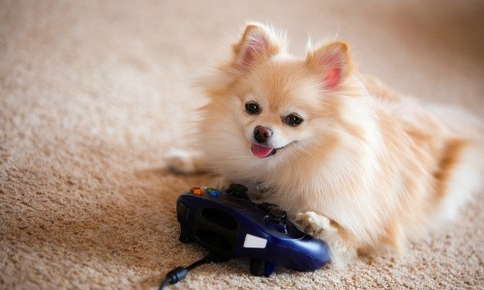 Does your pet want to play video games, too?

People aren't the only ones playing video games these days. Plenty of dogs and cats are spending hours catching virtual fish or playing complicated memory games. Although your pet may enjoy the games, are they a good idea?

Games can also be helpful if your pet suffers from separation anxiety while you're at work. If your pet is concentrating on playing a game, he or she won't be thinking, "Oh no, I'm home alone again!"

Although your dog won't be able to turn on an app on a tablet while you're away, he or she can play games on a Clever Pet Hub or similar device. The Hub features dozens of color-based puzzles. If your dog touches the correct sequence of colors, he or she receives a treat from the food dispenser. You determine when the Hub is turned off or on and control how much food is dispensed.

Just like people, dogs and cats can experience changes in their cognitive abilities as they age. Interactive games can help keep older pets alert and engaged by challenging them to learn new skills.

Researchers at the University of Veterinary Medicine in Vienna discovered that touchscreen and tablet games helped dogs avoid the mental decline that can occur as a part of aging.

They trained dogs to use touchscreens during several different studies. In some studies, touching the screen with a paw or nose at the right time in the game triggered the release of treats. The dogs quickly learned how to play the games, which become increasingly complicated with each level.

The researchers found that participation in the study offered several important benefits for older dogs, including:

Although playing games can be very beneficial for pets, it may not be the best idea if:

A combination of physical activity and mental stimulation will help keep your pet happy and healthy. Regular checkups also play an important role in your pet's health. If it has been a while since we've seen your pet, or you're concerned about a health or behavioral issue, give us a call.

We look forward to hearing from you

Find us on the map